Once again Red Bull and the FMB World Tour have once again teamed up to bring you the Rookie of the Year Award, which aims to highlight young riders (between the age of 16 and 21) from around the planet, asking them to submit a trick-filled video which will be judged by an FMB World Tour judging panel and the winner will get the chance to compete at a Crankworx FMBA Slopestyle World Championship event.

This season, the Red Bull Rookie of the Year Award will go to the winner of the Red Bull Best Line video competition. The riders who scores the best line will receive a Wildcard to a Crankworx FMBA Slopestyle event in 2021, including both flights and accommodation, as well as an additional €500, – in cash. Last year’s winner, Tim Bringer from France, was super stoked on the chance to compete and prove himself in his very first Crankworx competition, which took place in March of this year in Rotorua, New Zealand, where he finished 10th.

“I was so stoked to finally ride my first FMB World Tour Diamond event! Riding a Crankworx course is definitely scary, but also fun at the same time and it just felt great to ride with everyone, especially since I´ve already known most of the guys from before the competition, so it was all about good times in New Zealand!” – Tim Bringer, Red Bull Rookie of the Year 2019.

HOW TO SUBMIT YOUR VIDEO FOR RED BULL BEST LINE

To enter this year’s Rookie of the Year competition, each athlete must either have a current FMB World Tour License or a free FMB Amateur License and be between 16 and 21 years old (born between 01.01.1999 to 31.12.2003). It is also mandatory to register for the event on the FMB World Tour website.

The clips must have a maximum length of 1 minute and must contain at least 3 consecutive tricks in one line. Cuts and additional music are not allowed.

Once you have finished your registration on the FMB World Tour website, it is time to upload your Rookie of the Year submission through Instagram with the following hashtags included:

Please note that only posts containing all three of the hashtags will be eligible.

All eligible submissions will be judged by a panel of FMB World Tour judges – some of the same ones that judge at many of the FMB World Tour events. The judging panel will consist of Grant “Chopper” Fielder, Geoff “Gully” Gulevich and Paul Rak.

Grant Fielder had this to say about what they’re looking for when it comes to video submissions – “We’re looking for a rider who shows a high variety of well executed moves, a rider who will be able to adapt to the highest level of Slopestyle contests.”

This year brings even more chances to win prizes! We are introducing two new award categories: The Athlete’s Choice Award and the People’s Choice Award.

For the Athletes’ Choice Award, the winner will receive a FMB World Tour License for the upcoming season as well as €750,00 in prize money.

The Athlete’s Choice winner will be selected by a roster of well-known FMB World Tour professionals, including current riders as well as veterans. Riders like Emil Johansson (SWE), Lucas Huppert (SUI), Tim Bringer (FRA) and Anton Thelander (SWE) have confirmed their participation and will be joined by others.

The third category, the People’s Choice Award, will give a voice to mountain bike fans from all over the world, giving them the chance to vote for their favorite Rookie of the Year submission. The cash prizes for this category are awarded as follows: First place receives €750,00, while second place gets €300,00 and, last but not least, the third placed rider in this category will walk away with €200,00.

In order to make voting for this category as seamless and as fair as possible, all Red Bull Rookie of the Year submissions will be uploaded to Clippero, an online challenge platform, which will allow fans to vote for their favorite video on a scale of 1-10. People’s Choice voting will be opened once all submissions are in and all submissions can be found here: FMB World Tour Clippero.

HOW TO SUBMIT YOUR “PEOPLE’S CHOICE” VIDEO – AS A RIDER

HOW TO CAST YOUR “PEOPLE’S CHOICE” VOTE – AS A FAN

1.    Head over to the FMB World Tour Clippero by clicking here
2.    Watch the submitted videos
3.    Click on Judge Entry to cast your vote
4.    Once you’re ready to cast your vote, you’ll need to register to the platform
5.    Following registration, you’ll be able to cast your vote on the submitted videos
6.    You get one vote per video, from 1 – 10, so either leave a 10 on your favorite video or choose a Top 3, Top 5, or if you’ve got the time, watch them all and give them all a grade!
7.    Drop a comment on the video with your favorite part from the video – the riders will appreciate it!

Johny Salido – “Keep on Keeping on | Dreaming of Rampage“

Journal
When Mexican freerider Johny Salido held a wildcard for Red Bull Rampage in his hands by finishing second at Marzocchi Proving Grounds in September 2019, he was completely overwhelmed.
Mehr

Journal
Who would not want to have their own product, designed exactly according to their own wishes and requirements? That is exactly the case for Danny MacAskill, who just launched
Mehr

Journal
YouTube star Tomomi Nishikubo is known for his creative way of riding bikes. With a strong background in trials riding, the Japanese rider approaches obstacles in a unique way
Mehr 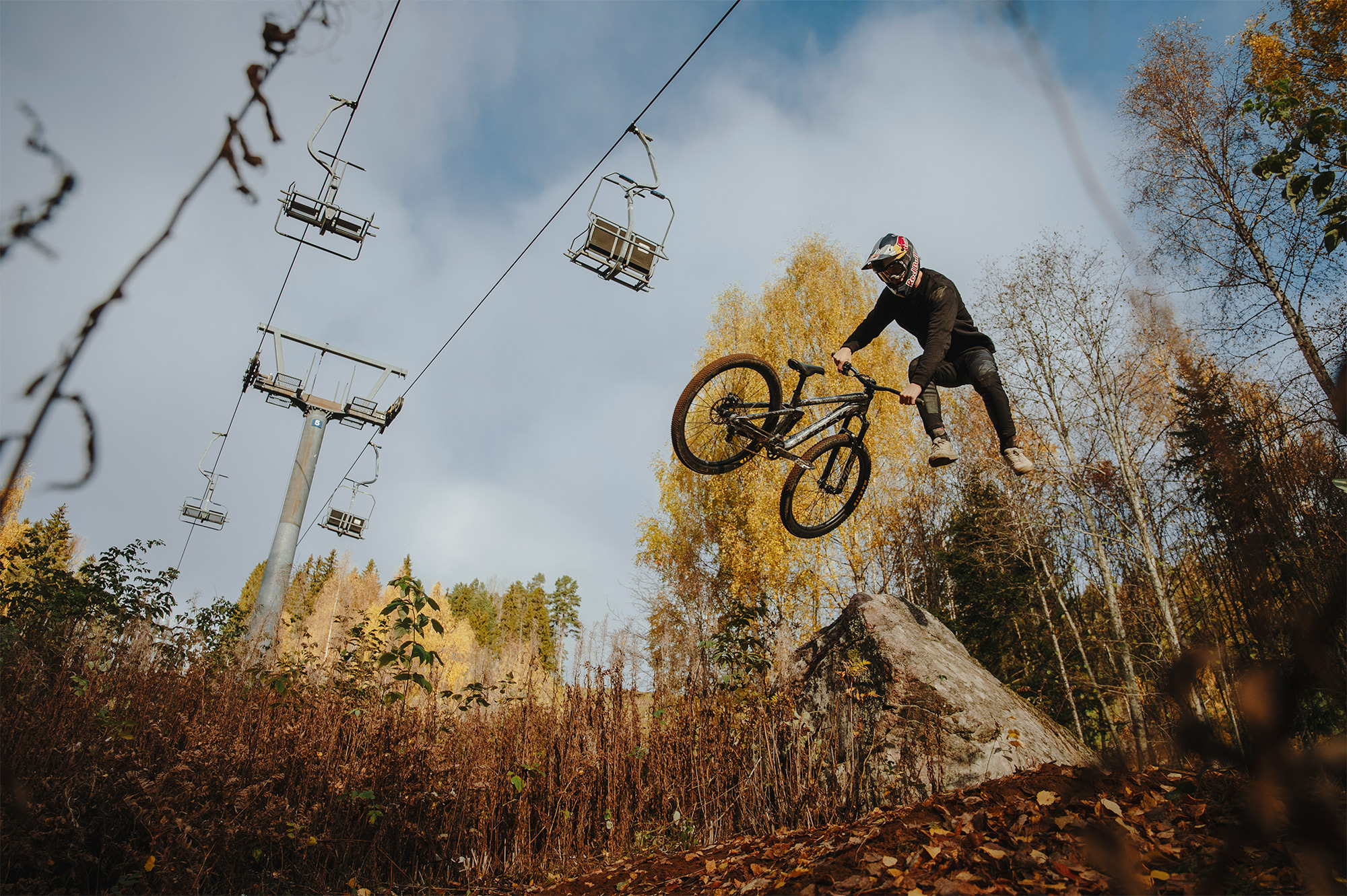 Journal
Emil Johansson teamed up with longtime friend and childhood hero Martin Söderström for a raw rip through the woods of Järvsö, Sweden. Filmed and produced by Red Bull, no
Mehr 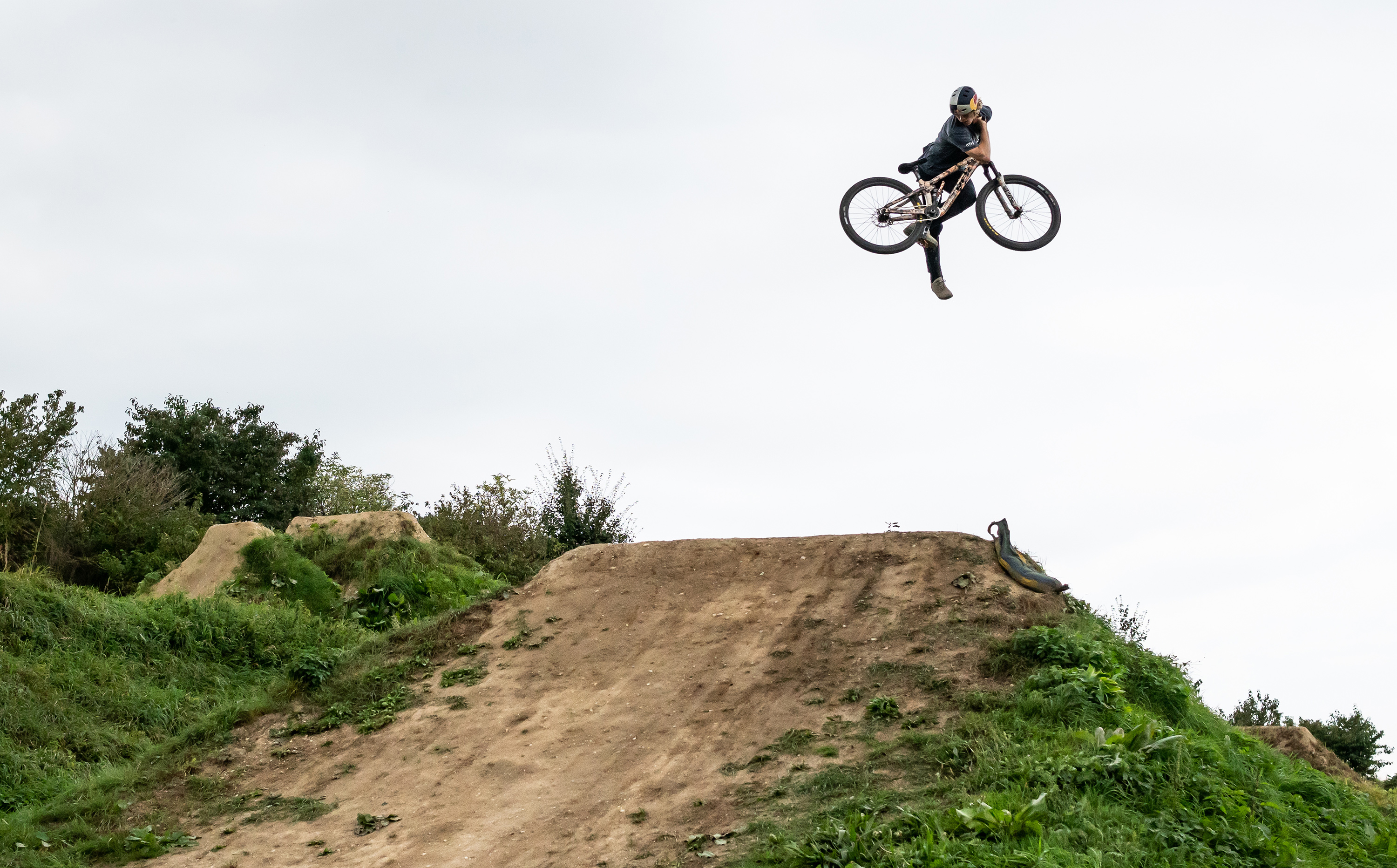 Journal
While staying in Munich to meet up with Tarek Rasouli, former bike pro and the founder of RASOULUTION, Emil took the chance to go for a quick riding session before heading to Crankworx Innsbruck. Take flight with Oscar Tepelmann, the race drone
Mehr

Gabriel Wibmer: “An Almost Perfect Dream” – Behind the Scenes!

Journal
One month after launching his newest trials flick “An Almost Perfect Dream”, which featured some of his strongest riding yet, Gabriel Wibmer just published a 26 minutes Behind-the-Scenes episode.
Mehr 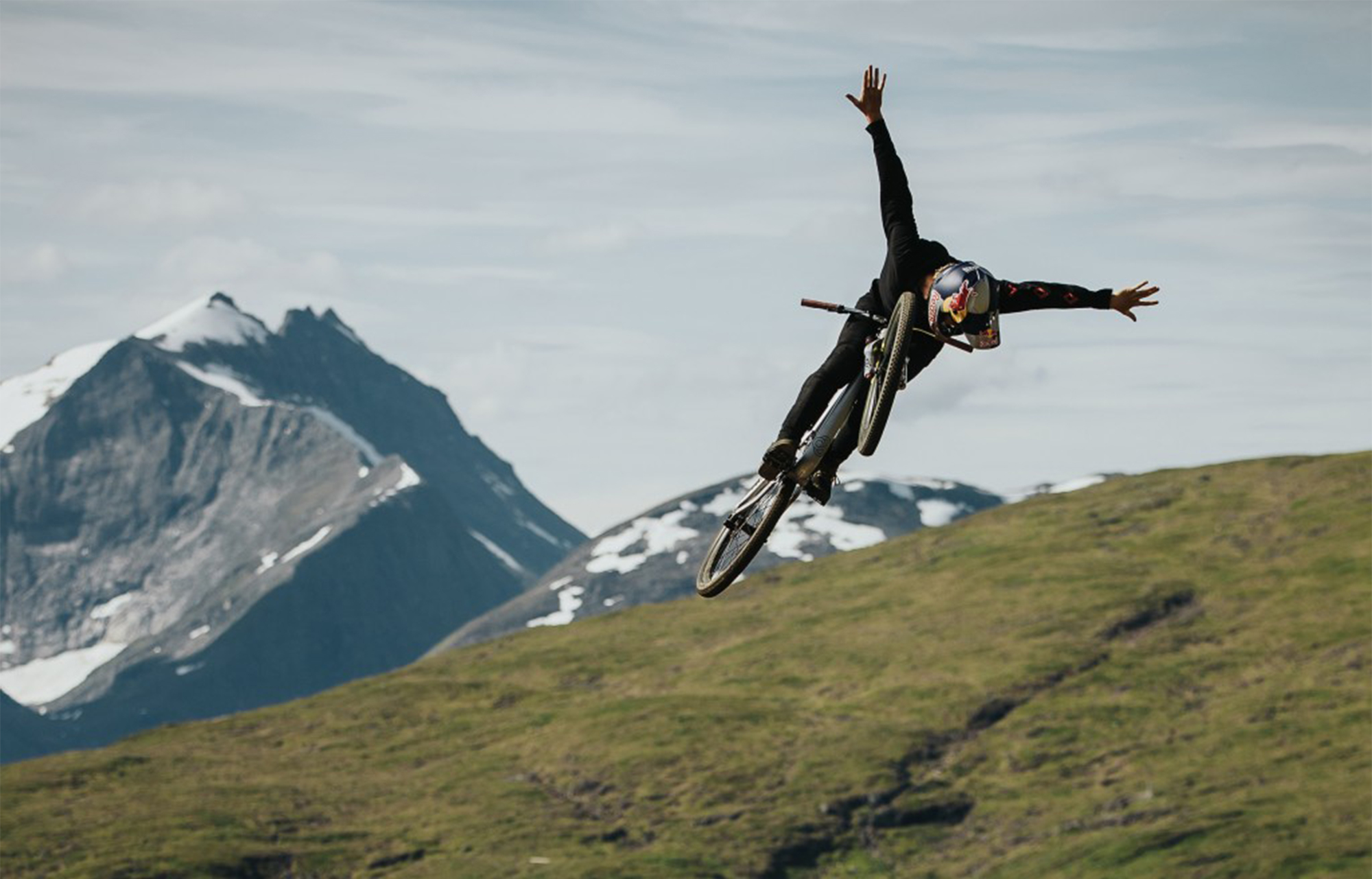 Journal
Most of the higher scaled film productions in the biking scene find their origin outside of Europe. The Tillmann Brothers´ however, are floating against the current. Showing what “The
Mehr 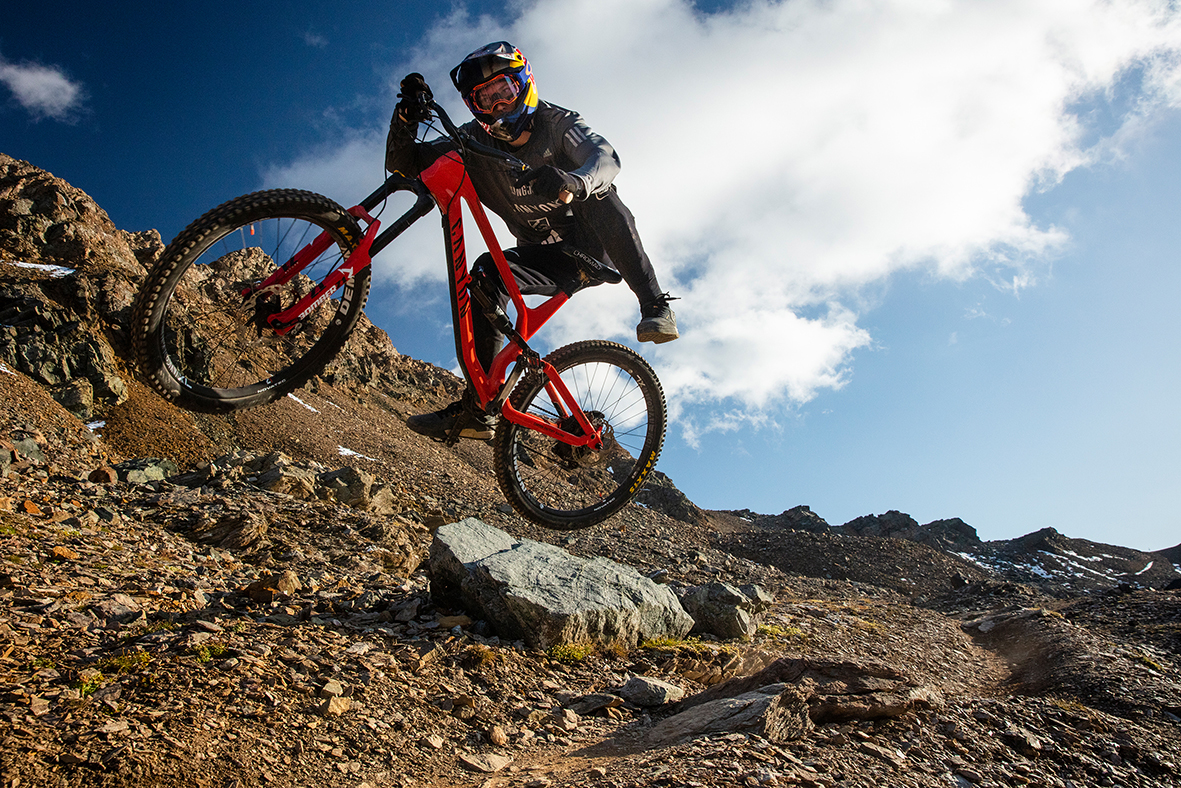 Tommy G – Meet The Man Behind The Legend

Journal
Do you remember when back in May the Bike Kingdom Lenzerheide kicked off its new monarchy with the first real banger bike video of 2020? Produced by Anthill Films
Mehr

Journal
Sportsmen from all over the world experienced a rather extraordinary year in 2020. All of a sudden they found themselves with an opportunity to complete creative projects sometime put
Mehr
VorherGabriel Wibmer Releases “An Almost Perfect Dream”
Emil Johansson Completes Crankworx hattrick with Innsbruck win, Tomas Lemoine and Erik Fedko round out podiumNext